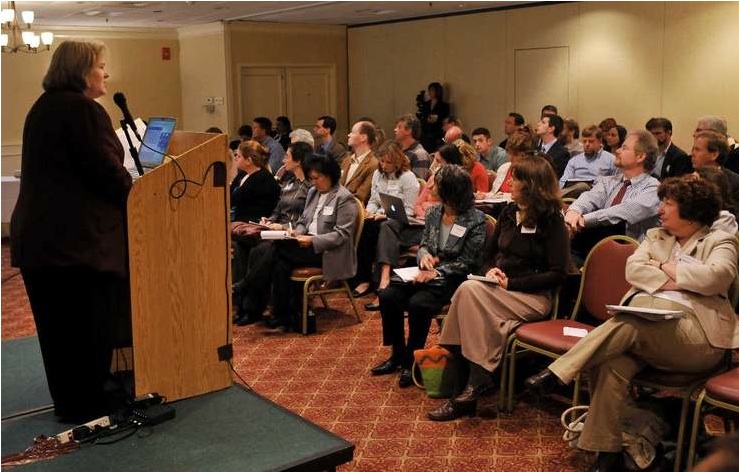 MARLBORO —  Hundreds of people from New England and as far away as New York crammed into the Holiday Inn yesterday to learn how they can get training and jobs in the emerging green economy.

Green Workforce Training and Associates hosted the First Massachusetts Green Career Conference with panels of leading experts in the green industry, as well as representatives of companies that are hiring and people with resources on how to get training for green jobs.

“I’m looking to go back to work now that my three kids are grown, and this is a market that interests me,” said 44-year-old Debbie J. Noyes of Harvard, a former software developer. “This time I want to do something that’s meaningful. Going from high tech to clean tech is appealing to me.”

Keynote speaker Kevin Doyle, principal of Green Economy and co-chairman of the New England Clean Energy Council, said Massachusetts is a leader in the green revolution because of important legislation the Legislature passed in 2008.

“The Green Jobs Act, the Green Communities Act, the Global Warming Solutions Act and the BioFuels Act — all of these acts are doing what government needs to do. They are increasing the demand side by increasing the standards that this economy and especially this energy economy needs to match,” he said.

He said most of the energy-efficiency jobs have existed for years. Employees need a little bit of “green-up” training to take advantage of the huge investment in energy efficiency the state is making, he said.

In 2007, a study by the Massachusetts Collaborative and the Renewable Energy Trust determined that, with 14,000 employees, clean energy was the No. 10 industry in the state. A study released in June by the Pew Charitable Trust found that clean energy jobs in Massachusetts had nearly doubled.

Mr. Doyle said Environment Northeast held a press conference at the Statehouse Thursday to announce that for every $1 million invested in energy efficiency, almost 36 jobs are created. He said the state plans to invest more than $400 million in energy efficiency over the next three to four years. He said hundreds of companies in Massachusetts are leading the green economy, including 334 companies that are classified in the solar energy cluster.

Many entry-level green jobs only require “ramp-up” training from on-the-job training and apprenticeship programs. But more important, the public school system needs to radically and dramatically improve its ability to prepare people for science, technology, engineering and math, he said.

“There is no way around that. If we want a technologically advanced economy with people that are trained for it, we need to put the money into it. We need to improve our schools and we need parents and students to demand it,” he said.

It wasn’t long ago that a professional environmentalist could be accurately characterized as someone sporting Birkenstocks, facial hair, and a penchant for field guides.

Judging by the clean-cut crowd at the Green Career Conference in Marlborough in early October, this is no longer the case. The sold-out event drew around 300 job seekers and representatives from companies large and small, including A123 Systems, the Watertown electric car battery maker that recently raised more than a half-billion dollars from its initial public stock offering and a massive federal grant.

Under the rubric of “clean energy,’’ these and other firms have created thousands of jobs in Massachusetts in recent years, and for the most part, the growth has continued through the recession. Global Insight, an economic analysis firm in Lexington , estimated there were 14,400 clean energy jobs in the state, with the most in energy efficiency, consulting, and renewable energy. Kevin Doyle, an environmental careers researcher and author, estimates there are around 1,500 employers in the clean energy sector employing 20,000 people, based on an analysis of payroll records and other data.

So how to get one of these green jobs, short of going back to school to study electrical engineering? A first step might be parting with the idea that there is such a thing as a green job, per se.

“If someone has a program called ‘green job training,’ walk in the other direction,’’ said Doyle, who gave the keynote address at the Marlborough conference. “We tell people over and over again to find the more general part of the workforce you want to be a part of, and then find the green component. For example, if you want to be a solar installer, a better idea might be to become a certified electrician.

In other words, environmental initiatives have created opportunities across the professional spectrum. A recent report for the Department of Labor, “Greening of the World of Work,’’ identifies 91 “new and emerging’’ occupations. These include energy auditors, who measure the energy efficiency of buildings; carbon traders, brokers who deal in carbon credits; and chief sustainability officers, who oversee a company’s environmental policies.

Then there are the so-called green-collar jobs. Around $8 billion in federal stimulus money has been designated for the hands-on work of weatherization and otherwise boosting the energy efficiency of buildings and homes. Massachusetts is spending millions on training programs for these jobs through its Clean Energy Center . But these efforts have largely targeted low-income populations, and, as Doyle points out, there are also plenty of out-of-work builders, plumbers, and electricians these days who are eager to fill these positions.

However, several local colleges are taking green-collar jobs to higher levels. This spring, Mount Wachusett Community College in Gardner plans to roll out an associate’s program in energy management, a field encompassing all the things a company or household might do to reduce their energy consumption.

UMass Boston is putting together a program on energy literacy. A primer on the scientific principles behind emerging green technologies, it’s the first program geared toward managerial-level professionals and entrepreneurs being funded by the Clean Energy Center , according to Marybeth Campbell, its director of workforce development.

For those angling for higher-level, nontechnical jobs in the green sector, such general knowledge – along with passion for the field – may go further than a discrete set of skills. “In an interview situation, if you’ve never done this kind of work before, we expect you to have done your homework,’’ said Nancy Keenan, human resources director at Marlborough’s Qteros, which uses a patented microbe to convert biomass into ethanol fuel. “We’re doing something important for the world. To think of this as just another job, that doesn’t work for us.”

Palmer Moore offers similar advice. He had been working for a high-end yacht builder until early this year, when he joined Nexamp, an energy management firm based in North Andover that specializes in solar installations.

While trained as a marine engineer, Moore now wears many hats. “In this sector, you have to come into it with energy and passion, and a willingness to learn quickly and resolve whatever you need to resolve. The nice thing is it’s not limited to one demographic or one select group of clientele. Everyone has to pay their utility bills.’’

Marlborough – Business owners, professionals, green activists, and local and state legislators flocked to the first statewide Green Career Conference, held Oct. 2 in Marlborough. Organized by local environmental educator Jennifer Boudrie, the event assembled many of the key figures leading the charge in creating a green economy in the area. Keynote speaker Kevin Doyle, author of “Green Economy and Environmental Careers” and cochair of the New England Clean Energy Council’s Workforce Development Group, discussed career paths that are being newly created and entrepreneurial ideas coming out of the emerging eco-friendly economy.

Conference attendees included a local architect who asked how she could help her clients navigate through the rebates, and others who asked about ratings on the wide variety of energy-efficient products emerging on the market.

“There is a job creation opportunity for what you are talking about,” Doyle responded. “People are looking for sources of good information.”

The sold-out conference drew over 300 people from across the state. Boudrie explained that 40 percent of the audience consisted of people transitioning into green careers and looking for jobs; staff from one-stop career centers and colleges helping people find jobs were another 40 percent; and staff from businesses and local and state government made up the remaining 20 percent.

“This conference was an important milestone in the emerging green economy,” Boudrie said.

Attendees learned about green career opportunities, and stakeholders from government, business and education had an opportunity to exchange ideas.

Featuring over 30 guest speakers, the conference also offered a panel of Massachusetts exhibitors from alternative and renewable energy companies, and college sustainability/green programs.

Although the conference did serve as an educational opportunity for local officials and companies to tap into potential green dollars and future career opportunities, it also had companies present who were hiring. Companies looking for new employers included manufacturers of clean energy, energy-efficient and alternative energy products and services.

Boudrie explained that she chose to host the venue locally, because the city is centrally located and easily accessible for people coming from all over the state.

“I was happy to have the conference locally,” she said. “It is good to stimulate interest in the emerging green economy and green careers locally.”

Attending the event were several city representatives including State Sen. Jamie Eldridge, D-Acton, who applauded Boudrie for her efforts.

“Jennifer has done a fabulous job,” said Peggy Ayers, district director for Eldridge. “It has slowly been getting to the point that people realize that there are white collar, blue collar and green collar jobs.”

Echoing Ayers’s review of the day and praise for Boudrie for organizing the event, Marlborough City Planner Nancy Savoie said she was very proud to have the event take place in Marlborough. 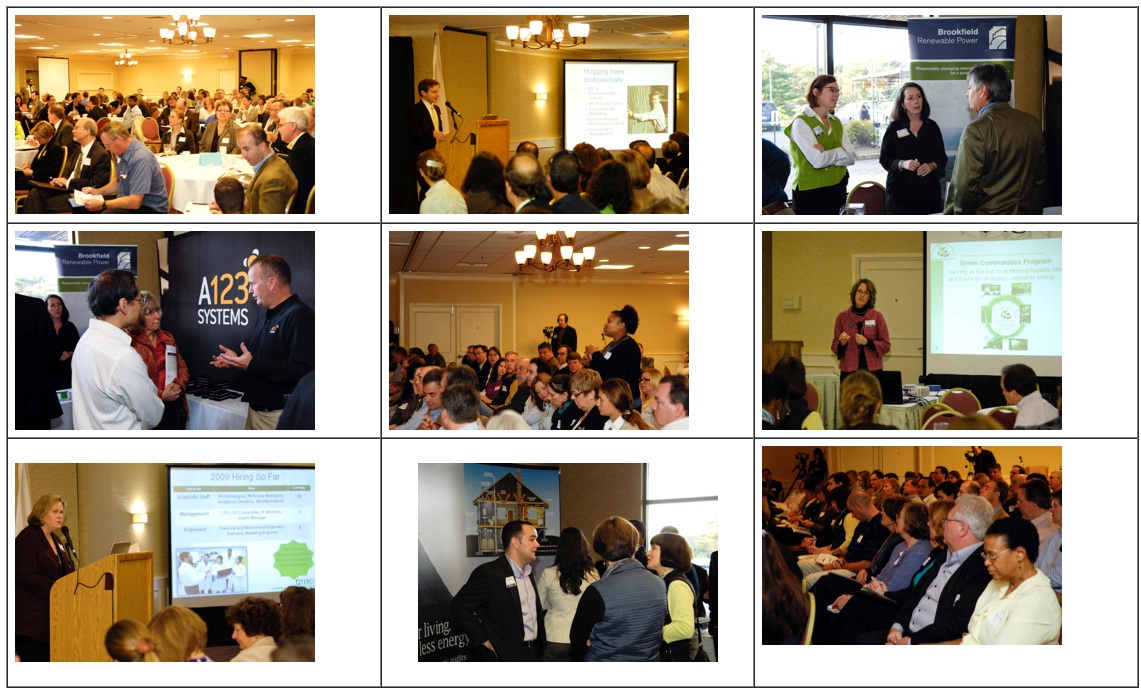