A 25-minute tour of the MassWildlife headquarters will be led by staff on September 20th.

Please read about its mission and green building features below: 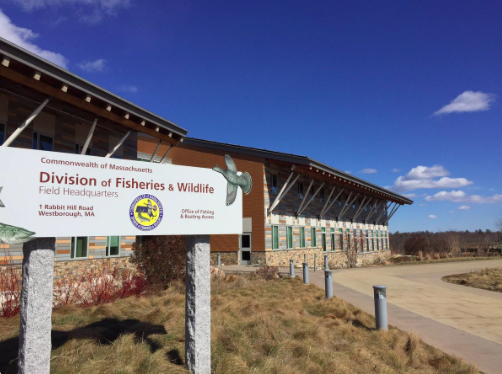 “The Massachusetts Division of Fisheries and Wildlife (MassWildlife) is responsible for the conservation – including restoration, protection, and management – of fish and wildlife resources for the benefit and enjoyment of the public.

MassWildlife works to balance the needs of people and wildlife so wildlife will be available for everyone’s enjoyment today and for future generations.

MassWildlife was founded as a state fisheries commission in 1866 in response to citizen concerns about the loss of Atlantic salmon to dams and pollution. The continuing development of the agency from that time until the present reflects the will of the citizens of Massachusetts to protect and restore our natural resources.

The conservation – including protection, restoration, and management – of Massachusetts’ fauna and flora is the statutory responsibility of MassWildlife. Specifically, MassWildlife’s charge is the stewardship of all wild amphibians, reptiles, birds, mammals, and freshwater and diadromous fishes in the state, as well as endangered, threatened, and special concern species, including native wild plants and invertebrates. This responsibility is established and articulated in the Constitution and General Laws of Massachusetts.

As the base of scientific knowledge regarding the interdependence of all environmental factors has grown, coupled with progressive, pragmatic leadership, MassWildlife’s mission has evolved to include all aspects of the environment. MassWildlife is committed to an evolving stewardship philosophy and to continued leadership in conservation and management of the environment.”  Source

About the LEED Platinum Building

“Construction of a new 45,000 gross square foot Field Headquarters Building, including office, labs, meeting and classroom areas on the site of the former DFW headquarters building on the campus of the former Lyman School in Westborough, MA.

The facility achieves zero net energy through solar photovoltaics and innovative mechanical systems as well as building envelope quality and reduction of all energy loads through building management.

The building features a very efficient envelope with triple glazed curtainwall and metal windows as well as structural insulated panels.  It has been oriented to optimize production from the rooftop photovoltaic panels while minimizing heating and cooling energy use.

This project also received the Honor Award for Sustainable Design at the Boston Society of Architects Design Awards in 2017.  The jury commented: “This new zero net energy public office building integrates seamlessly into the environment and seems like it is a part of nature. The building is beautiful, but not at the expense of sustainability, and should serve as an example for other state-funded buildings. Its enclosure – elegant, tectonic, and modular – deserves special notice. The outdoors is brought inside in a way that is conducive to natural life. Water management, including the incorporation of a splash trench which collects and channels roof runoff, is interesting and compelling. Part of the plan calls for continuous improvement, which emphasizes a paradigm shift that enables the architect to be part of the building’s lifecycle, even after turning it over to the client. This is a unique and rare design process, and we hope it is replicable.”

The current energy model is calling for of 303 mwh/yr which equates to 22.6 kBtu/ft².   Compared against the expected 370 mwh/yr production of the PV system, this is a projected 22% buffer between energy use and production and is approximately 60% below typical usage for this type of building.

Leed modeling results suggest that the designed building will reduce actual energy cost by 50.1% compared to the Leed baseline building.

The majority of energy savings are in heating energy. These savings result from improved heating performance (heat pumps use ~25% of the energy that electric resistance requires for the same load), exhaust air energy recovery (reduces ventilation loads by ~70%), demand controlled ventilation (reduces ventilation loads by ~50%), improved envelope performance, and the decoupling of the outside air system from space loads which reduces reheat.”  Source